In 2006, for two weeks, and more than 4000 km, Dr. Pasang Y. Arya visited fourteen botanical gardens and many natural parks to start a research project on the medicinal herbs used in the Tibetan materia medica that grow in the European Alps.


How did you get the idea of studying the plants that grow in the Alps ?

A long, long time ago, with some of my friends, we visited the Lake Maggiore region and stayed several days in the mountain near Domodossola (Italy). As I didn’t have anything special to do, I went out for a walk in the forest, and there, to my great surprise, I saw many herbs that also grow in Tibet. I felt very interested, because I have a natural interest for plants. Of course I learned Materia Medica during my Tibetan medicine study and later specialized in the subject. During amy teaching time at the Dharamsala Mentseekhang, I visited Kulu, and Manali as well as Ladakh and many other Himalayan mountains. So, when I saw these plants in Italy that looked the same as in India, I was very surprised and interested. I even felt like meeting old friends…
I kept in mind the wish for a research on this topic, but couldn’t succeed to fulfill it for many years.

In 2000, while I was giving a materia medica seminar in Bad Ragatz, (Switzerland), my students organized an herbs excursion in Davos, at the Schatzalp Alpinum botanical garden. There I saw again many medicinal herbs, around fifty or sixty species, cultivated or wild, that also grow in the Himalayan mountains.

In 2004, I went back to Davos with around twenty of my students, but, unfortunately, the time of the excursion was less favorable and we could only observe a fewer number of these plants. Anyway, this revived my wish to study further the Tibetan medicine plants of the Alps and their geographical distribution.

The second reason for my interest in discovering the Tibetan plants growing in Europe, was that there is a great lack of Tibetan medicine here, as only few Tibetan formulas are produced in the West. It is also very difficult to import Tibetan medicine products from the East. So even if students appreciate Tibetan Medicine a lot, when it comes to the practical point, their demand for the material part generally cannot be fulfilled. Therefore I felt that maybe the European herbs study could be a good solution to develop the herbal tradition and knowledge. Also, here, many herbalists already sell herbs in their shops that could be used according to the Tibetan medicine principles.

What is interesting is that some herbs are used for the same purpose in Western and Tibetan materia medica, and share the same power and potency point of views on plants. But sometimes their use target is completely different. For instance Tibetan materia medica says that a particular herb is very useful for headaches, while here it is used for the intestines. Or Cardo mariana (Carduus Marianus), which is used in Tibetan medicine as an emetic, is used in the West for the heart and liver purification. So there are definitely some differences between the two traditions.

That is why I’ve also initiated this project to study deeper the similarities and differences between the two medical traditions.

I also would like to study deeper the connection between the ancient European herbs knowledge and Tibetan medicine. According to the Tibetan medicine history, in the ancient time, especially in the 7th to 10th centuries, Greek medicine developed much in Geece and Italy, then to Syria and Persia to eventually reach Tibet. Many of Galen’s work were translated into Tibetan also in the field of Materia Medica. For instance Theriaken: Theriac is a Greek word, (Tib. Theng-gsos, which means ‘instantly curing‘). Theriac is used in Greek medicine against snake poisoning, and that name “theriac” is still used in Tibetan medicine. We have 25 Theriaken in Tibetan materia medica. So, you see, there were connections and exchanges between the two traditions in ancient time. I think that rediscovering their relations could be very worthwhile for both. So it would be very interesting to gather people interested in this kind of researches in the future.

So the three main lines of this new research project are on:

Then, in 2006, with my wife Chungla, my daughter Dolma, and a student of mine, Claudia Bottazzi, we decided to make this big 4000 km tour throughout the European Alps, starting from Italy, to Austria and Switzerland, visiting fourteen botanical gardens and many natural parks. 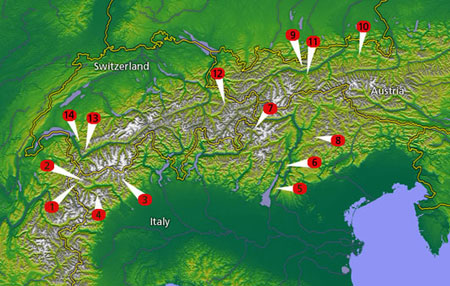 1. Chanousia botanical garden, La Thuile, 2170m
Our Alps survey began in La Thuile, near the French-Italian border. The botanical garden is supervised by a suisse professor. We found a quite large number of Tibetan herbs growing there. They have a CD rom and a guide information book.

2. Saussurea botanical garden, Courmayeur, 2175m
On the other side of the Piccolo San Bernardo, is a small garden, located in the middle of the mountain, which is only accessible by a cable car, which is unfortunately quite expensive. The herbs garden contains some interesting plants, which can also be found in the Chanousia garden. This purpose of this garden seems to be mainly touristy.

3. Castello di Savoia, Gressoney Saint Jean, 1350m
The Castello de Savoia is an old castle in front of which is a small botanical garden The general view point is beautiful indeed, but the garden doesn’t have particular medicinal plants. But outside of the garden are some quite interesting plants,  growing wildly, that I hadn’t see much elsewhere. So basically, even if the place is beautiful, it is not so useful for the herbs study.

4. Gran Paradisia botanical garden, Cogne, 1700m
In this botanical garden, many plants from Europe, but also from the Himalayas are cultivated. There could be around 60 – 70 different species.
This garden is a very good one and we enjoyed the place a lot. The area outside the garden is beautiful indeed. Maybe one of the most interesting botanical gardens for Tibetan plants in the Italian mountains.

5. Montebaldo botanical garden, “Hortus Europae”, Novezzina, 1232m
The garden doesn’t have so many types of Tibetan herbs, but they are quite interesting. It is mainly a nice place for tourism, and has facilities such as a restaurant, a small conference room,…

6. Monte Bondone botanical garden, Viote, 1565m
This garden is quite interesting regarding to the number of Tibetan plants growing there. It is visited by many schools and tourists. Outside the garden are also many interesting plants naturally growing there.

7. Passo dello Stelvio natural area, 2760m
This is a protected area, where a large amount of plants grow wildly.
On this high pass there are not many plants, but on the lower parts, also in the forest, many common plants easily grow.
These plants also grow on the other mountains, but what is interesting here is that on that mountain a lot of yellow Aconitum grow. This was the first time I saw this plant in the west. There are also a lot of Black aconitum, which is more widely spread in Europe and is poisonous. The place is very touristy and beautiful, but for the study of Tibetan medicine plants, it is not so useful.

8. Dolomites mountains
The area is incredibly beautiful. Lots of common plants grow there, but not many medicinal plants. On the other hand, I saw two very important ingredients used in Tibetan medicine: Conodopsis and Calcite stones. Codonopsis is especially used for rheumatism, arthritis and also nerves problems.
It was the first time I saw the Calcite stone in the West. So the place doesn’t have many Tibetan medicinal plants, but some of them are very important.
Of course we couldn’t cover all the Italian Alps, but these are probably the main places.

10. Alpin flower garden, Kitzbuehl, 1880m
This garden is about one hour driving distance from Innsbruck city. It is located on the top of the mountain, and can be reached by cable car. It is a tourist place. The scenery is very beautiful. There is an herbs garden, but there is no special collection but we saw some species that we hadn’t see elsewhere.

11. Patscherkofel, 2248m
After taking a very long cable car from the city, it is possible to climb up the mountain, but there is nothing special there. At the cable station (2000m) there is an herbs center run by the Innsbruck University, but there was nothing really interesting there related to the Tibetan medicine plants.

13. La Thomasia botanical garden, Pont de Nant, 1260m
This garden has a good collection, and many Himalayan herbs are cultivated here. This is then a good address for the Himalayan medicinal plants, but also for herbs from many places in the world.

14. Gentiana foundation for the medicinal plants knowledge, Leysin, 1263m
This garden is recent and expanding. This is a special garden as the plants cultivated there are mainly scientifically tested. Only medical plants are cultivated.

According to your observation on the alpine plants, are there many differences between the European and the Himalayan plants?

Many species found there are similar to the Himalayan ones, but because of the different soil nature and their geographical position, the European plants are mainly bigger and strongly built. In some cases, even if the plants share the same family and genus, the species are different.

Do you think that plant species that grow in Europe have the same nature and quality as those growing in Tibet?

Therefore I tasted some herbs. For instance the taste of the Gentiana that grows in the Alps is definitely less bitter than that of the Tibetan Gentiana from Ladakh or Tibet. This plant is small, but if you taste it, the bitterness remains in your mouth for about one hour. The European Gentiana, which is bigger, has a taste that is not so bitter. That is the difference. I think the difference comes from the fact that in the Alps, the climate is more humid, and then makes the plant grow much bigger. There is much more water in the plant, but it is as if the taste was diluted. There is more plant juice, but with a less powerful taste.

Of course, this comparison should be studied further. But superficially, roughly speaking, it seems that the Himalayan mountains plants are more powerful than the Europeans ones.

In conclusion, many Tibetan medicinal plants can be found in the European Alps, but throughout Italy (Valle d’Aosta), Austria and Switzerland, it seems that there is not many variations in the wild species. In almost all natural parks, you can find the same plants, without many differences. I think it is because these mountains seem to bear the basic same quality and soil type. Of course, in the botanical gardens, there are various species as these plants are cultivated, so, for this, their visit was quite worthwhile.

Anyway, this trip was very useful to get a better idea on the alpine plants that also grow in the Himalayan countries.

What are your next plans about this subject ?

Now my wish is to introduce these plants more to my students and, if possible, to later go back to the mountains, with more time, and to lay down notes on the herbs growing there, and on the different species cultivated in the botanical gardens. Then perhaps, a booklet on the Tibetan plants growing in the Europeans Alps could be useful for the interested people.